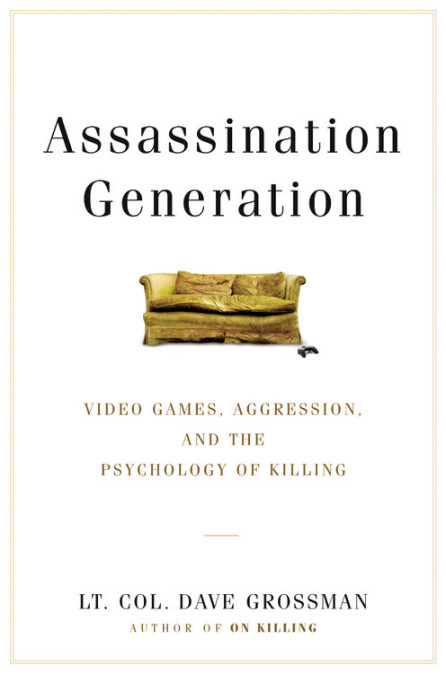 He was booked before the school massacre in Florida to talk about his latest book and research findings concerning active killers in America “Assassination Generation: Video Games, Aggression, and the Psychology of Killing”.

Audio interview on Price of Business with Kevin Price (11:03 duration):

Americans are at odds over how to end mass killings, while proven research and what is working gets overlooked or ignored by politicians and the media who seem to be agenda driven – focused more on gun control rather than prevention.  He cautions about calling these monsters “active shooters” which paints all shooters in the gun community as bad people, which they are not. Instead he refers to them as maniacal murderers who deserve to be taken out of the gene pool like a wolf that attacks an innocent flock of sheep.

Lieutenant Colonel Grossman has written books on the subject of the psychology of killing.  He asserted that over 330 million Americans have an aversion to killing and that only sociopaths are prone to attack. Other countries who do not share the rights we do in America, hold higher murder rates per capita and records when it comes to mass death by mentally ill gunmen or lone wolves (as they are referred to).

According to Mr. Grossman, violence is escalating in America due to violent video gaming and graphically death-focused movies.  The results are out and it is important that society comes to an understanding that disarming law-abiding Americans will only increase the murder rate in the USA.

Kevin Price said “Grossman brings one of the most important areas of discussion to the mass murderer crisis in the US today.  Incredibly, it is almost entirely ignored by the mainstream media.”

“Conservative media seems to have a better handle on the issues of illegal guns and violence, and our audiences are very familiar with history, current events, and the state of the dynamic at play in America to position politics over solutions and solve the problem that is right before us,” says Doc Greene, Radio Commentator, “We know that massacres in America have an alarming trend and profile and it is time for the liberal left to control their hysteria and listen to a servant leader and proven instructor like LtCol Grossman to save children and adults and to help others from becoming victims of violent attacks.”

For more information on the Killology Research Group visit: www.Killology.com

In their description of Lt. Col. Dave Grossman, Slate Magazine said, “Grossman cuts such a heroic, omnicompetent figure; he could have stepped out of a video game.”  He has five patents to his name, has published four novels, two childrens’ books, and six non-fiction books to include his “perennial bestseller” On Killing (with over half a million copies sold), and a New York Times best-selling book co-authored with Glenn Beck.

He is a US Army Ranger, a paratrooper, and a former West Point Psychology Professor.  He has a Black Belt in Hojutsu, the martial art of the firearm, and has been inducted into the USA Martial Arts Hall of Fame.

Col. Grossman’s research was cited by the President of the United States in a national address, and he has testified before the U.S. Senate, the U.S. Congress, and numerous state legislatures.  He has served as an expert witness and consultant in state and Federal courts.  He helped train mental health professionals after the Jonesboro school massacre, and he was also involved in counseling or court cases in the aftermath of the Paducah, Springfield, Littleton and Nickel Mines Amish school massacres.

Since his retirement from the US Army in 1998, he has been on the road almost 300 days a year, for over 19 years, as one of our nation’s leading trainers for military, law enforcement, mental health providers, and school safety organizations.

Today Col. Grossman is the director of the Killology Research Group (www.killology.com).  In the wake of the 9/11 terrorist attacks he is has written and spoken extensively on the terrorist threat, with articles published in the Harvard Journal of Law and Civil Policy and many leading law enforcement journals, and he has been inducted as a “Life Diplomate” by the American Board for Certification in Homeland Security, and a “Life Member” of the American College of Forensic Examiners Institute.