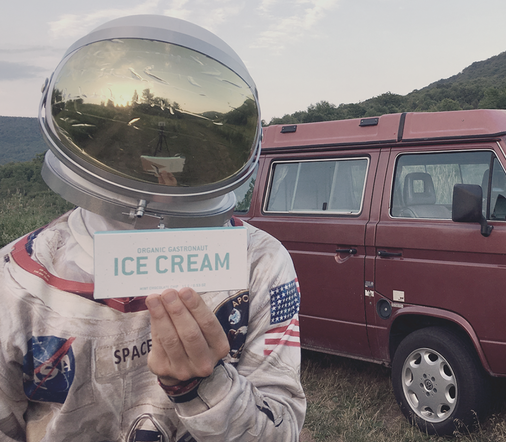 Name and Official Title of the CEO

Tell Us About Your Business

Robert worked on his business for over three years before finally launching Gastronaut Ice Cream on July 11, 2016. The business’s focus is on organic freeze-dried ice cream bars that will NEVER MELT!  The ice cream bar is designed to be eaten anywhere on the planet with a life span over three years! (Technically it should last much much longer than that with untampered packaging, but best to be eaten within 3 years for optimal flavor)

Robert is currently the only employee but, will need to hire in order to complete the first production run after his Kickstarter campaign has concluded on August 10, 2016.

What Makes Your Company Stand Out In Your Industry?

Gastronaut Ice Cream offers the only organic freeze-dried ice cream on the planet! Before, freeze-dried ice cream was only brought to you with low quality ingredients making it less of an enjoyable experience, which with ice cream kind of defeats the purpose.  With organic high quality ingredients Gastronaut Ice Cream will prove to be  one of the best on the go desserts for any adventurer!

What Contributions Are You Willing to Make Towards the World?

Gastronaut Ice Cream was launched with a sense of adventure!  Robert would like to encourage people from all walks of life to get outside and get active, encouraging a healthier way of living and an adventurer’s mind set.  He hopes to provide ice cream bars to organizations that help introduce youth to the outdoors.

Who or What Has Influenced You?

Malcolm Gladwell’s book Outliers-  This book not only planted the idea of starting a business into Robert’s head, it outlined the importance of finding meaning in your work in order to succeeded.

“While often rewarding and incredibly fun, working in advertising wasn’t always the most meaningful job, so I decided to focus on an entrepreneurial pursuit.”

Andy Spade- The co-founder of Kate Spade and Jack Spade has been an entrepreneurial influence for Robert.  Andy Spade like Robert, began in the advertising business but left to pursue and channel his creativity into his own projects.

The eCommerceFuel Podcast-  The Podcast has shown to be one of Robert’s greatest sources of influence, providing motivation through the hundreds of hours of work he has put into the launching of Gastronaut Ice Cream.

What Key Qualities Do You Look For in Your Team?

As of yet Robert is still a lone adventurer but, with his past experience in the advertising industry he knows exactly what he is looking for.  Passion.

“Hiring in the advertising industry led me to look for people with interests outside of the job they’re applying for. If they can show passion projects that they’ve followed through with just for the joy of it, that’s a big sign of their motivation and enthusiasm.”

Words of Advice For Others Growing Their Business?

“Wish I was in a place to give advice for growing a business! I can however give advice for starting one and that’s to do it today and stop over-thinking everything. Take the plunge and figure it out as you go.”