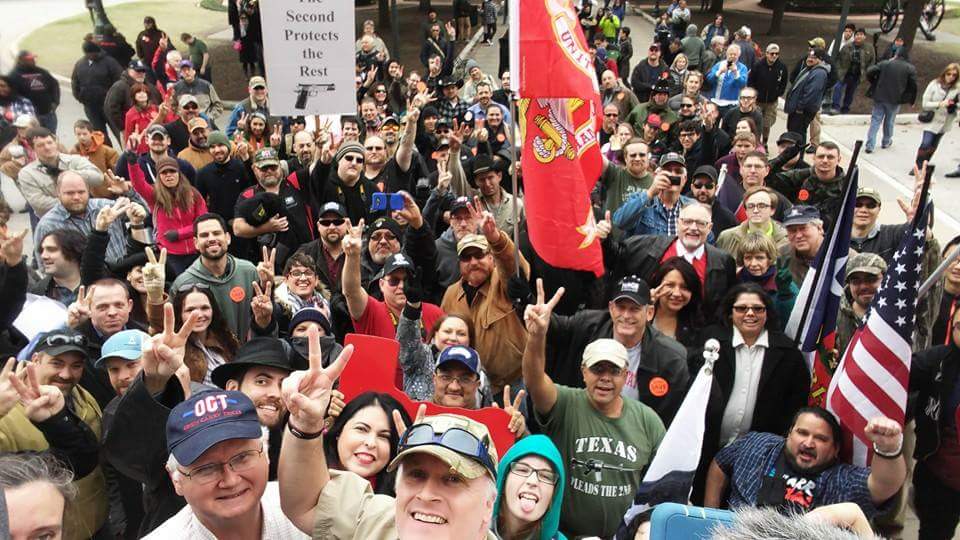 Temple, Texas (March 23, 2018) – Open Carry Texas has scheduled several rallies and counter-protests for the next several weeks. With gun control becoming more aggressive in their desire to disarm the American people, we will likewise remain active and vigilant against threats to our constitutionally-protected rights. The cleverly named “March for Our Lives” that will be occurring around the country and within our state will not go unchallenged. Their list of demands reads like something straight of the Communist Manifest and Mao’s Little Red Book. We agree with the “March for Our Lives” organizers that it is the duty and responsibility of society and government to protect our children and schools. However, we adamantly disagree with how that is to be achieved most efficiently.

Instead of offering real solutions, the gun control crowd is dancing on the corpses of children to push an agenda. History has proven that when a good guy with a gun is present at the commission or initiation of a violent crime, that crime is quickly negated. We believe that the solution is not to disarm law-abiding citizens, but to make it easier for more law-abiding citizens to carry where they are most vulnerable, including our public schools. We also believe that schools should implement policies like student and faculty RFIDs to gain access to buildings. Finally, we believe that schools should adopt a program of allowing law enforcement and military veterans that have been trained, cleared, and vetted to provide voluntary security services to local schools. Schools should not be encumbered with additional expenses like hiring guards or pulling law enforcement officers from their commitments to the entire community.

In order to ensure that these solutions are heard and a part of the discussion, OCT will be participating in counter-protests at many different anti-gun rallies around the state. These counter-protests will be peaceful, professional, and cordial:

March 24, different times: “March for Our Lives” rallies in: San Angelo, Dallas, Austin, San Antonio, Houston, Corpus Christi, El Paso, Killeen, and Waco. Many others will occur in smaller towns, but we don’t have specific details.

April 7, noon: “Olmos Park Forced Education and Awareness Open Carry Protest” at Olmos Park Police Department – Open Carry Texas will be holding a major rally demanding accountability and respect for the gun rights of citizens in Olmos Park, Texas, a suburb of San Antonio. Over the past several weeks, the Olmos Park Police Department, with the blessing of Chief Rene Valenciano, has time and time again violated the rights of several individuals. The Chief believes he has the authority and legal ability to stop, detain, and/or arrest – often at gunpoint – law abiding citizens with holstered handguns or long arms. Threatening to shoot individuals who present no threat to the public and are simply exercising their rights will not go unchallenged.

You can see a summary of the oppressive actions by Olmos Park PD:

Our purpose is to 1) educate all Texans about their right to carry in a safe manner; 2) to condition Texans to feel safe around law-abiding citizens that choose to carry them; 3) encourage our elected officials to pass constitutional carry legislation for all firearms; and 4) foster a cooperative relationship with local law enforcement in the furtherance of these goals with an eye towards preventing negative encounters. For more information, contact Richard Briscoe at Richard.briscoe@gmail.com or 210-240-8939.