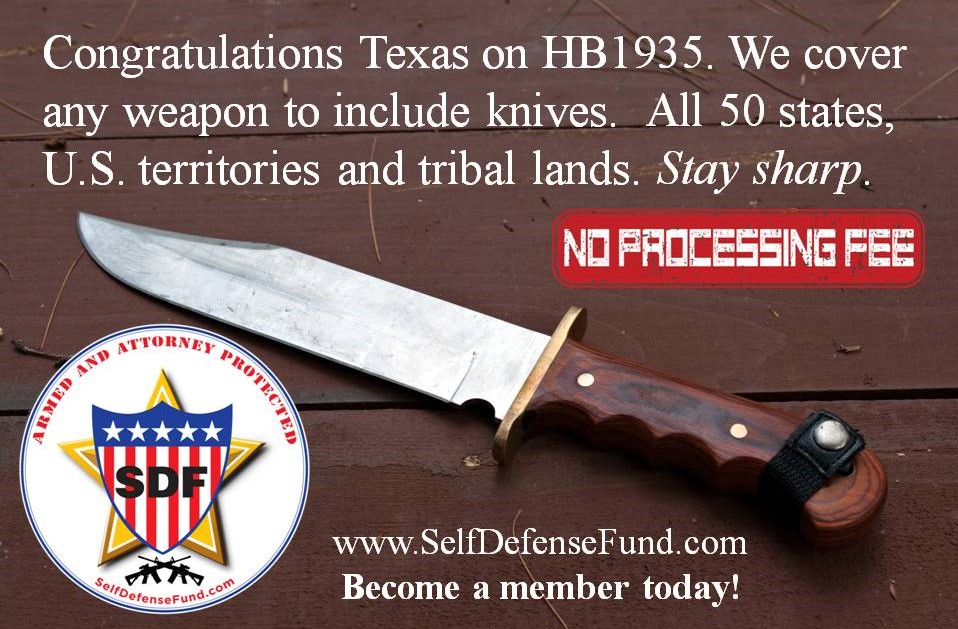 SelfDefenseFund.com Continues to Support the Momentum to Restore Liberty in America

Fort Worth, Texas (June 16, 2017) –  Governor Abbott signed HB1935 into law removing knives as prohibited weapons which will allow citizens to carry just about any kind of knife or long-blade of their choice with few restrictions and no license required.

“SelfDefenseFund.com (SDF) is known for defending our members in the use of any weapon; however, the general public may not be aware that a knife can be just as dangerous as a gun, they never run out of bullets,” says Andy Valadez, Marketing Director and Marine Veteran, “Some folks cannot afford a firearm nor do they want to carry one concealed or openly under the licensing situation in Texas, so knife rights are very important to many who want to protect themselves and their families with fewest restrictions.”

Texans may see fellow Texans carrying larger fixed blade knives and even swords.  Some have argued that armed citizens make for dangerous situations, yet the founding fathers were insistent in making the 2nd Amendment available to Americans.

“Open Carry Texas hails the legislature for finally coming to its senses and removing unconstitutional and nonsensical prohibitions on the carry of knives in Texas. It has been a shame that for so long Texans have been unable to carry a knife bearing the name of one of the defenders of the Alamo. The Texas legislature has restored a small part of our state pride,” says CJ Grisham, Combat First Sergeant Army (retired) and Founder of Open Carry Texas.

HB 1935 will become effective on September 1, 2017 and will allow people to carry most knives anywhere in the state such as daggers, dirks, stilettos, poniards, swords, spears and most notably, Bowie knives except for a narrow list of places such as schools, colleges, correctional facilities, houses of worship, and bars that derive more than 51% of their income from alcohol sales. Minors are also restricted as to when they can carry these knives.

SelfDefenseFund.com is a comprehensive litigation protection membership covering individuals, families and businesses in regards to personal protection with the use of any weapon in all 50 states, U.S. Territories and Tribal Lands.