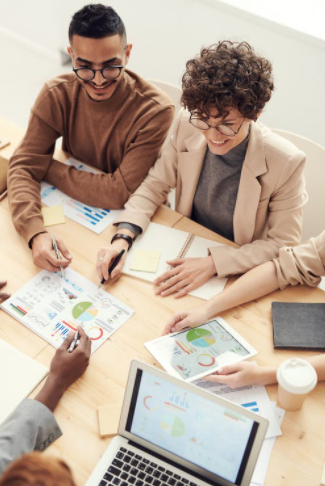 In a longitudinal study shared with me by one of my Fortune 500 clients, more than 120 teams were studied over a three- year period at a cost of several million dollars. These teams were selected because they had accomplished extraordinary results in terms of new product introductions, cost reductions, innovative business solutions, and the ability to get superb results. These peak-performing teams turned out to have five qualities in common.
1. Shared goals. Every team that achieved extraordinary results had shared goals. When they were given their assignments—to cut manufacturing costs, increase the speed of new product development, or expand market share—the first thing the top teams did was to sit down among themselves and get complete agreement on the goals toward which they were working.

Clarity is essential. The greater clarity people have with regard to their goals, the easier it is for them to commit whole- heartedly to achieving them. There is a direct relationship between participation in the discussion of goals and the commitment and determination of the team members to achieve those goals afterward.

If you announce a goal to your team, the goal remains your property. But if you involve the team by explaining and dis- cussing the goal, the team takes ownership of the goal. They then become more creative in finding ways to achieve the goal, faster and more cheaply.

2. Shared values. The top-performing teams had shared values. Like the team goals, these were developed by discussion back and forth among the team members until everyone was in agreement.

With values like these, the teams worked together smoothly and got much more done.

3. Shared plans. The best teams had shared plans. Every- one knew the plan of action. In addition, everyone knew what each team member was expected to do and when and how accomplishments would be measured. The entire team managed by objectives. Team discussions were focused around the common goals, common values, and common plans. Everyone was intensely result-oriented in a spirit of cooperation, harmony, and synergy.

4. Leadership of the action. The fourth quality of the top teams was that the leader “led the action.” The leader of the team was not only a peer and a friend, but he actively worked to achieve the goals of the team. He set an example and was a role model for the others.

The top leaders in the best teams saw themselves more as “blockers” rather than as commanders or directors. As blockers, they defined one of their main jobs as the removal of any obstacles that might be holding one of the team members back from doing the very best job possible. They concerned themselves with small things like air conditioning, comfortable furniture, computer screens, transportation, and other resources. The leader viewed his job as helping the other team players to do their jobs.

Externally, the top teams were always asking for feedback from their customers and other stakeholders. If they were doing something wrong, or if there was a defect in their work or their products, they wanted to know about it immediately so they could make changes. They were not afraid of criticism or complaints. In fact, they encouraged and welcomed negative feedback and used it as a springboard to be even better next time.

One of the characteristics of top teams, in every area of endeavor, is open communication. Conflict resolution is invariably accomplished by means of openness, honesty, and straight talk. There are no hurt feelings, resentments, or avoidance of difficult issues. Everything is laid on the table on a regular basis.