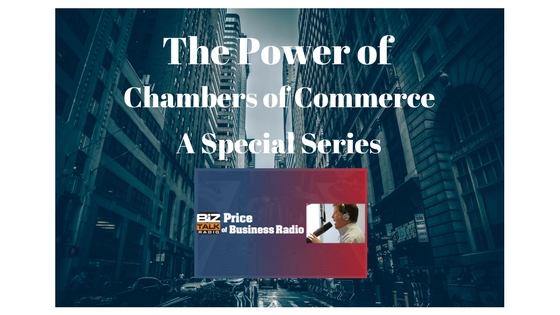 Recently the nationally syndicated Price of Business Radio show began a new series celebrating Chambers of Commerce around the country and the importance of their influence today.  In an article,  It was noted:

“Kevin Price, Host of the Price of Business show, has been a member of local Chambers of Commerce for years.  ‘I am a real fan,’ he says to business owners often.  He believes that it is at the Chambers of Commerce where relationships happen, deals are made and business communities grow.  ‘I also believe that, in spite of the huge move towards technology for networking, these Chambers are more important than ever.  In fact, technology reminds us that social media and other tech tools show us that it is important to actually know people in the real world too, it is a great way to stick out in a sea of online ‘friends,’ Price said.”

“With that, the Price of Business show, which is nationally syndicated, coast to coast, on the Biz Talk Radio Network, will be inviting leaders from Chambers from around the country to be a guest on his show.  He is looking forward to doing interviews with these leaders in business communities around the country.  In addition, we are doing commentaries with actual members of various Chambers as well.”

The first in our series was with Angela Kubisky of the Morris County Chamber of Commerce, which is in New Jersey.  She discussed the power and importance of networking with Price.

Next, the Price of Business show, in partnership with EZ Attract, will be reaching out to members of the Chamber to give them opportunities to tell their story on our media.  There will be no cost for their participation.

Here’s Angela’s interview with Kevin Price, host of the Price of Business show on the Biz Talk Radio Network.